The first of three successive away games takes Wanderers on one of their shortest trips of the season; a return to Vicarage Road, for the first time in nine years.

The Hornets have changed manager 12 times since Gianfranco Zola's men squeezed past Gary Waddock's Wanderers in a League Cup meeting on a sunny August afternoon, but current boss Xisco Munoz has made an impressive start to life in Hertfordshire, winning eight of his 14 games in charge - including four in a row prior to a 1-0 loss at Bournemouth at the weekend.

Gareth Ainsworth - appointed just a month after that cup encounter - has also guided his side to an upturn in performances and results of late, but it is the latter that now becomes critical as the Chairboys fight to stay in the division, looking to recreate their brilliant showing against promotion-chasing Reading last week.

The 1-1 draw between the sides in the reverse fixture in October saw the Blues collect their first point of the Championship season, and a victory tonight would also be a landmark event on the calendar, against a side who spent the five campaigns prior to this one playing top-flight football.

READ: In numbers, by Tom Hancock
VIEW: Gallery of the 2012 meeting
PLAY: Wyc Picks comes with a £500 cash pool
WATCH: It's live on iFollow

Last Time Out
Here are the highlights from the 1-1 draw with Watford in October:

Team News
Uche Ikpeazu and Adebayo Akinfenwa have both spent time on Watford's books and return to Vicarage Road, with Akinfenwa returning to the bench for Sunday's clash with Norwich after time on the sidelines. Ryan Tafazolli is back from his suspension, and Ryan Allsop has also returned to training. Jordan Obita collected a knock at the weekend, and Joe Jacobson is on standby if required at left-back.

Watford are without the suspended Joao Pedro and Nathaniel Chalobah, while Isaac Success, Tom Dele-Bashiru and Troy Deeney are all injured.

Kit
Wanderers will be in their red and white quarters.

Man in the Middle
Geoff Eltringham has shown 62 yellow cards and five reds in his 21 games so far this season, which included Wanderers' 2-1 loss at Barnsley, when both sides were awarded penalties, and the 2-0 defeat at home to Swansea.


Wanderers' Championship fixture at Watford on Wednesday 3rd March will now kick off at the earlier time of 7pm.

A battling Wycombe performance was not enough to keep Premier League promotion chasers Watford at bay, as Andre Gray goals in both halves saw the Chairboys lose 2-0.

Both teams took part in a minute’s applause before the action kicked off, to remember Watford legend Glenn Roeder, who passed away earlier this week.

A slow start to the game saw an early corner for Watford loop into the box and fall at the feet of Tom Cleverley, whose shot was shut down by Jack Grimmer, forcing the ball out of the danger zone. Watford looked strong and held up the pace to control the tempo of the game within the Chairboys half.

Some sharp bursts of energy from the Chairboys saw them overturn Watford’s seemingly strong start, seeing them win a free kick, a corner and an attempt on goal. They had a promising first 10 minutes, however this was quickly dampened by Andre Gray who found himself in plenty of space in front of the Chairboys goal, firing it home from close range and giving Watford the early lead.

Wycombe quickly reset and calls of reassurance from the bench seemed to give them an instant lift. David Stockdale’s strong delivery met Fred Onyedinma and gave him a chance to run through on goal. However, overall the early Watford goal had given them confidence and they continued to control the game, with the Wanderers trying their best to upset play, with Stockdale making a vital save from a back heel attempt to keep the goal difference at one.

Uche Ikpeazu worked to press the back line of his former club, proving to be a handful for the Watford defenders throughout the half. At the other end, Ismaila Sarr continued to slice through the Chairboys defence finding himself on the edge of the box, calling Stockdale into action again, who made an outstanding double save, Jacobson quickly discarding the ricocheted ball.

The Hornets continued to up the pressure; Adam Masina attempted a volley in the direction of goal, the ball remaining in the Blues goal mouth before they escaped danger just before the half as Phillip Zinckernagel’s ball fired over the bar.

With the second half back underway, the Chairboys quickly showed Watford that they were still in the game as David Wheeler’s goal was ruled out for offside. Individual moments of brilliance from Sarr were continuously met by a strong Wycombe back line, Josh Knight being key to this. Watford continued to test the Wycombe defence as their quick free kick was headed back towards the box before it was cleared by Jacobson, denying the Hornets another goal.

The aforementioned talents of Sarr stretched the Watford lead, as his cross was met by Zinckernagel, who flicked it forward to Gray, making it two for both the Hornets, and bagging him the brace.

The atmosphere remained tense for Gareth Ainsworth’s side as Ikpeazu turned the ball around Kiko Femenia, leading to a Wycombe free kick inside the Hornets half. Play continued, seeing Jack Grimmer attack the home side's defence before being fouled just outside the 18-yard-box. Jacobson slotted the free kick into the box, meeting the head of Ryan Tafazolli who caused a scramble to get a foot on the ball right in front of the Watford goal – but to no avail.

Ikpeazu managed to get the better of the Hornets defence before falling twice in the 18-yard-box, the referee ignoring the calls for a foul before the striker managed to get back onto his feet, allowing Ryan Tafazolli the chance to roll the ball out to Thompson who fired his shot wide of the goal.

Ainsworth made two further changes to his side in the 79th minute bringing Uche Ikpeazu and Daryl Horgan off, freeing up space for Scott Kashket and Adebayo Akinfenwa.

Watford continued to ramp up the pace, cutting through the Wycombe defensive line, forcing Stockdale to make yet another save. This was met by a dangerous counter-attack from the Blues with Thompson flicking a ball into the box only for Akinfenwa to head it wide of goal and extend the wait for the general’s first goal in the Championship.

Garath McCleary then slipped through the Watford midfield, giving Wycombe the chance to put something on the scoreboard, Bayo headed the ball forward, marginally missing the foot of Wheeler before it met McCleary again, but he was unable to finish the effort of the team in front of the Watford goal.

Kashket made himself and his presence known by slipping through on goal, calling the Watford goalkeeper, Daniel Bachmann, into action but giving away a foul for his endeavour with the final act of the game.


Wanderers' Championship fixture at Watford on Wednesday 3rd March will now kick off at the earlier time of 7pm. 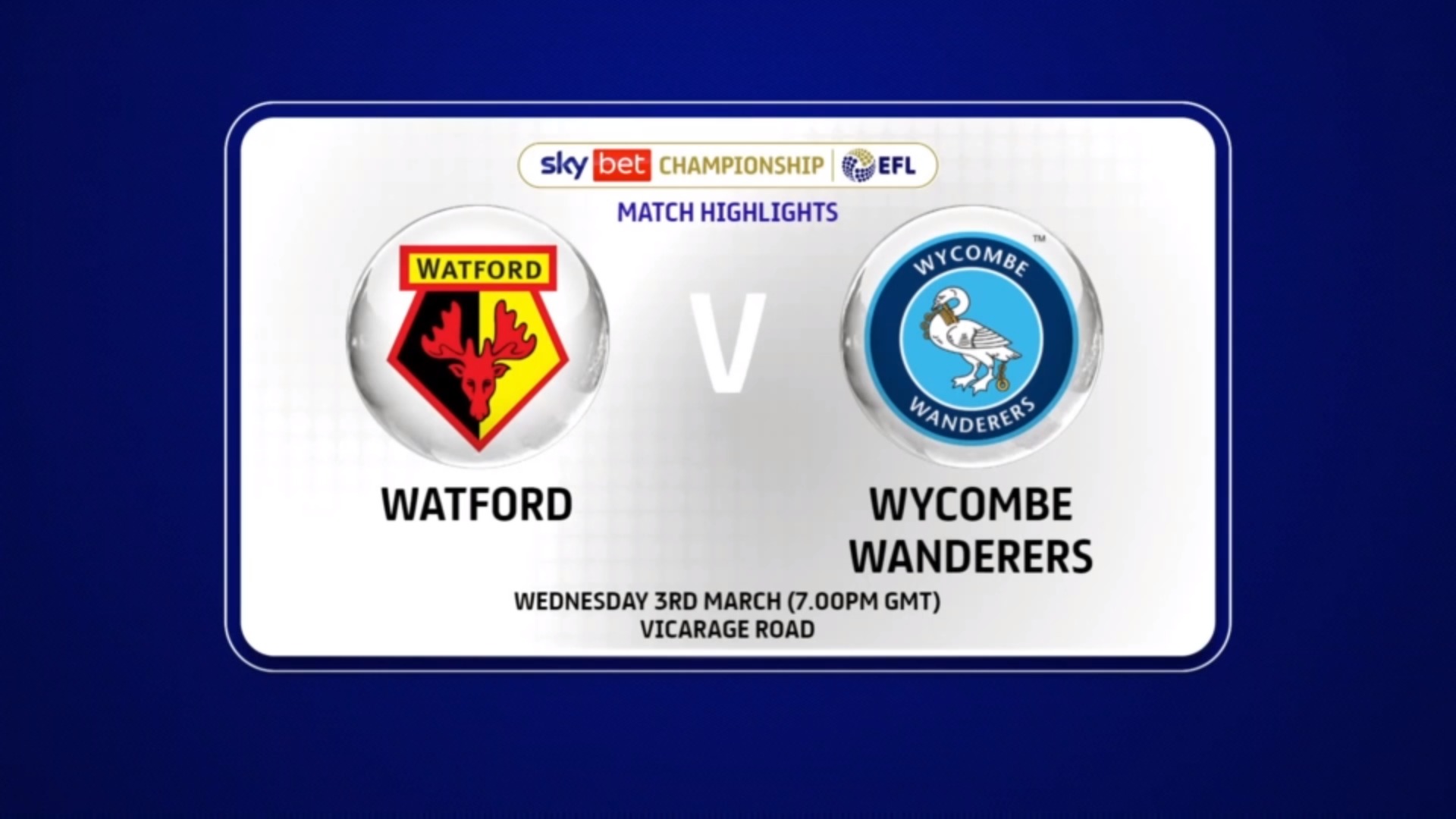 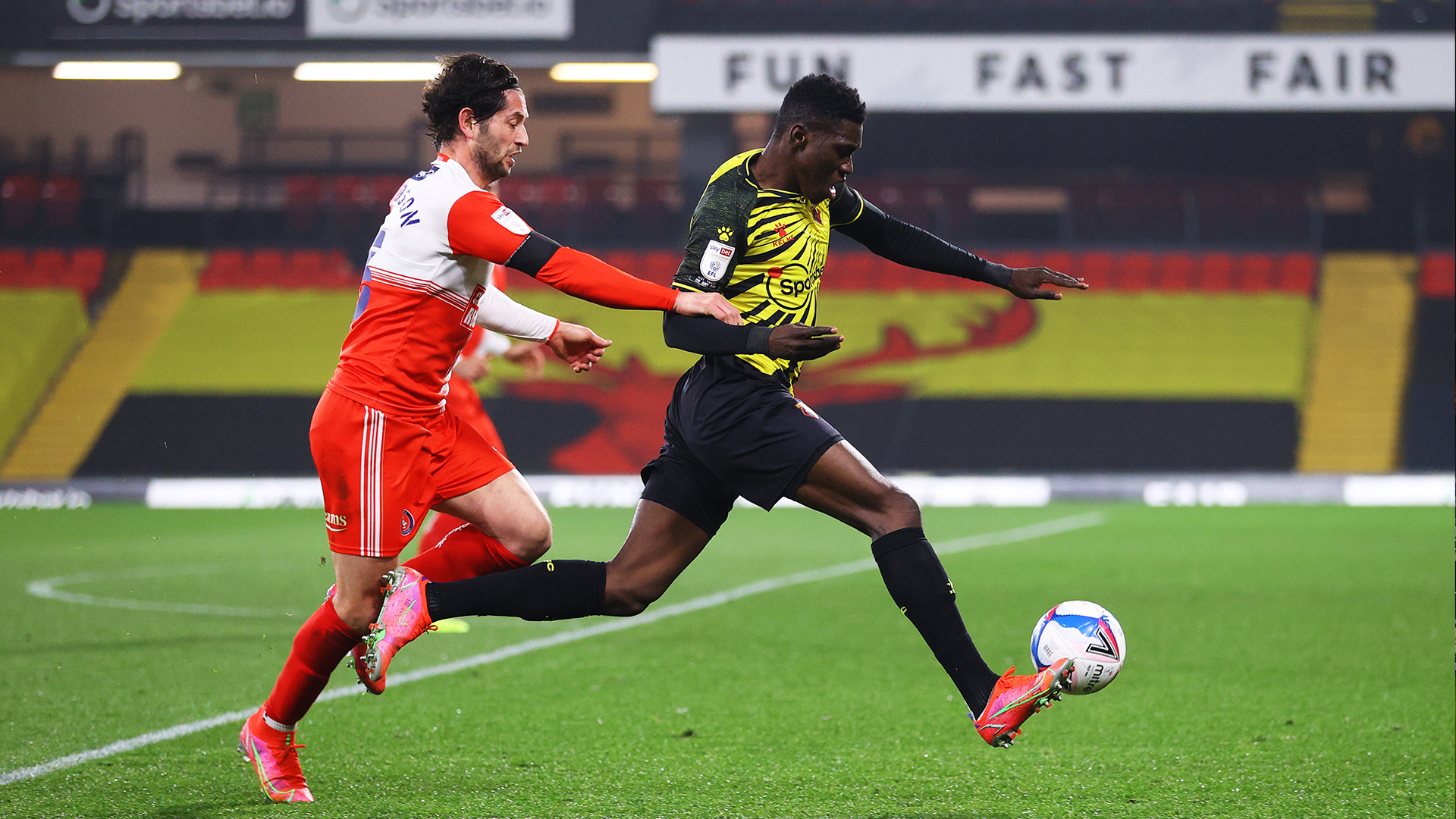