Hot off the back of a stunning comeback win at Huddersfield at the weekend, Wanderers go into battle tonight against a resurgent Derby County, themselves full of confidence after a strong run of results.

These sides drew 1-1 in the reverse fixture in November but it's the Rams who've enjoyed the better fortunes since then, gradually pulling away from the drop zone thanks to four wins from their last five outings, including Saturday's 2-1 win at home to Middlesbrough.

They lost 3-0 at Rotherham 10 days before that - a stark reminder of the brutality of the division when standards drop and perhaps complacency sets in - and the Rams will no doubt be reminded of that setback before they step onto the Adams Park surface tonight.

Wycombe's sparkling second-half display in Yorkshire has breathed new life into their own survival battle, and with - touch wood - a succession of injury worries no behind them, Gareth Ainsworth's men are raring to go for tonight's encounter as they look for their first home league win of 2021.

Last Time Out
Here are the highlights from Wanderers' 3-2 win at Huddersfield:

Team News
Dominic Gape and Adebayo Akinfenwa could return to the squad after staying home as a precaution at the weekend, while Joe Jacobson faces a late assessment on the muscle strain that forced him off at Huddersfield.

Derby have called George Edmundson into the squad for the first time, but Tom Lawrence is sidelined through injury along with Tom Stretton, Curtis Davies, Krystian Bielik and former Blue Jordon Ibe, while Patrick Roberts is also a doubt.

Kit
Wanderers will be in their regular home strip, with the goalkeeper in Mardi Gras colours.

Man in the Middle
Kevin Friend has shown 41 yellow cards and two reds in his 19 games so far this season; he referees a Wycombe game for the first time since the EFL Trophy meeting with Oxford in 2018, having also overseen an FA Cup meeting with Swindon in 2007 and league games at Leyton Orient and Chesterfield in 2004.

Derby County completed a smash and grab at Adams Park as they nabbed all three points against a purposeful Wycombe side. The Chairboys pushed Derby to their limits, as a disallowed goal, subsequent own goal and stoppage time winner saw the Blues come away feeling disheartened.

Some great periods of possession and high-tempo play saw the Chairboys go close on a number of occasions throughout the game with Anis Mehmeti and Uche Ikpeazu looking particularly dangerous, but it wasn’t enough to secure even a solitary point against an off-kilter Derby side.

A relatively open ten minutes saw both sides enjoy bouts of possession in the centre of the field. Uche Ikpeazu was doing what he did best on Saturday against Huddersfield, putting the back line under pressure and chasing long balls forward from Jordan Obita and Daryl Horgan.

Derby County had the first shot on target, as Martyn Waghorn cut inside on the edge of the 18-yard-box to hit hard and low but Ryan Tafazolli was on hand to block. Uche continued to cause problems, making a solo run from the midfield, Derby boxing him out and conceding the foul to be safe.

It was Wycombe that looked to have made the most of their early pressure. A Wycombe free kick was taken quickly by Anis Mehmeti to slide Horgan behind the Derby defence. He did well to place the ball in the back of the net, but the linesman had his flag up for offside. A dubious decision upon examination of the replay, and unfortunate that the Chairboys couldn’t take the early lead.

The questionable decision was made even more frustrating by the fact that Derby were able to then take that lead. Derby, who have recently become known for their corner tactics, were able to whip a curling ball front post, which was turned home by Uche trying to defend against his man in the 16th minute. Wycombe 0-1 Derby.

A frustrating way for Derby to get ahead, but Wycombe didn’t let their heads drop, continuing to pile the pressure on and cause issues for the back line. Horgan was again running rings around his man on the left hand side, providing some great service on the cross. David Wheeler was unfortunate to not quite make contact with one delivery that could have put the Chairboys back level.

The defence were also standing strong, with Tafazolli making a fantastic block on the half an hour mark to keep the game within reach.

The final ten minutes were nearly all Wycombe. Mehmeti did well to cut-back to Horgan, who unleashed a powerful effort just wide of the post. Minutes later, Mehmeti and Horgan linked up again, as a quick throw allowed the former to again set to Horgan who delivered a well-placed cross onto the head of Uche, who’s shot was denied by the fingertips of David Marshall in the Derby goal. Wycombe wrapped up their trio of chances at the end of the half as another Horgan cross was controlled by Uche, who turned and got a shot off, high and wide.

It didn’t take long for Wycombe to be rewarded for their perseverance. Some fantastic play down the right hand side saw Josh Knight bundled onto the floor in the 18-yard-box. After winning a penalty on Saturday, Uche stepped up to take it this time round. The Wycombe number nine made no mistake in sticking the ball straight into the back of the net.

The Chairboys were back into it, and they were clearly up for the fight. Wycombe 1-1 Derby.

The goal seemed to spur Derby into some action, as they had a period of possession. It didn’t take long for Wycombe to get back into their stride though, and continue to cause issues for the Rams.

The Chairboys came close in the 70th minute, as Garath McCleary found the feet of Mehmeti, who skipped past three Derby players and got a fiery shot away, which whistled just past the top corner.

Gareth Ainsworth brought on fresh attacking legs five minutes later, as McCleary and Mehmeti made way for Fred Onyedinma and Dominic Gape. It didn’t take long for them to make a difference either; First, Fred linked up with Uche, who went on on his own, taking on a couple of players and getting a shot off. Fred caused issues again when he outpaced his player and went through on goal, only to be bundled off the ball.

Another agonisingly close chance in the 82nd minute saw an Obita free kick sent looping towards the back post, but no one was able to hit home in the ensuing pin-ball.

A free kick to Derby in stoppage time looked dangerous, and proved to be so, as Waghorn’s initial delivery hit the post, only to be bashed hard and home by Andre Wisdom.

Heartbreak at the death, as the game finished Wycombe 1-2 Derby. 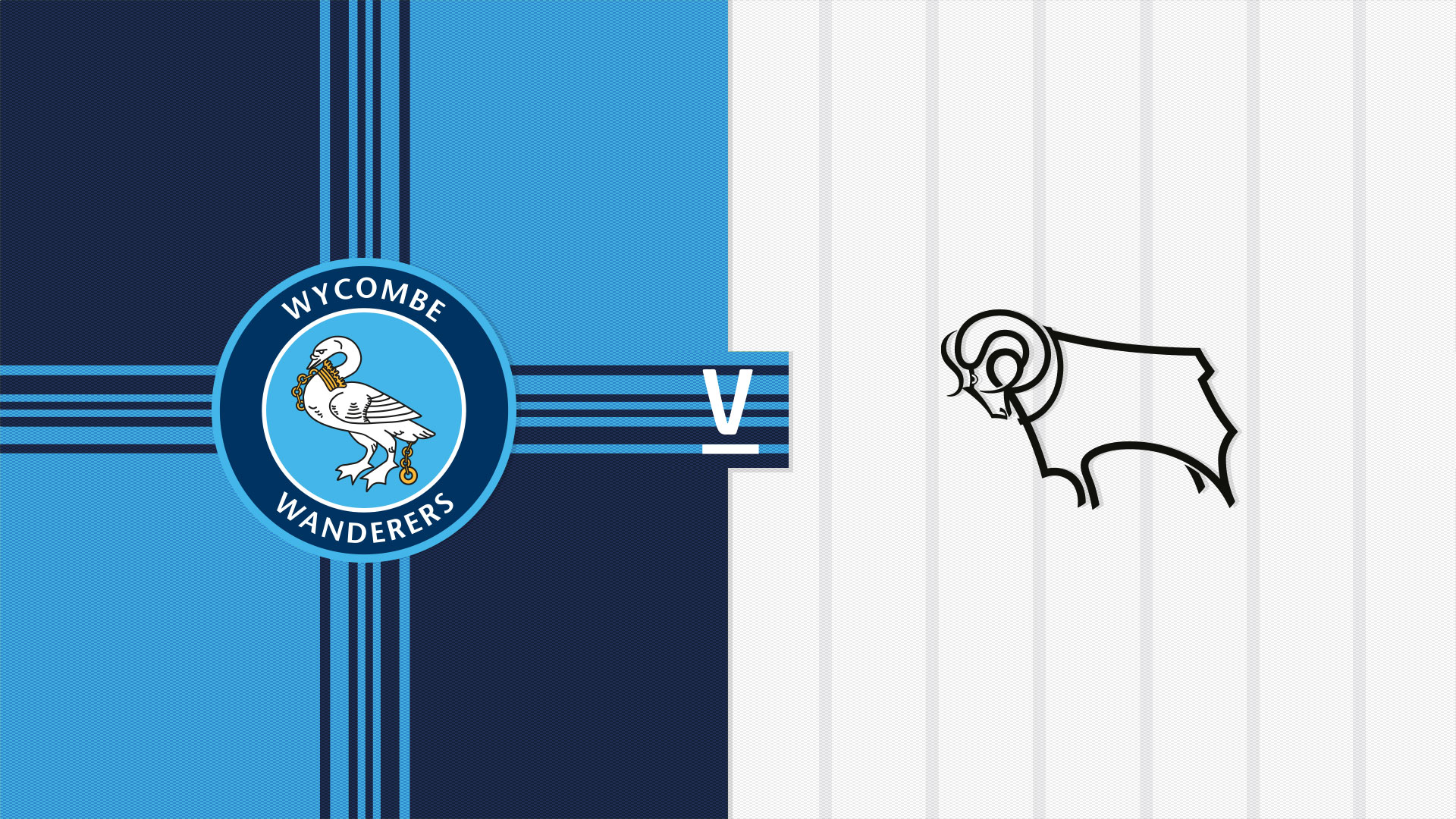 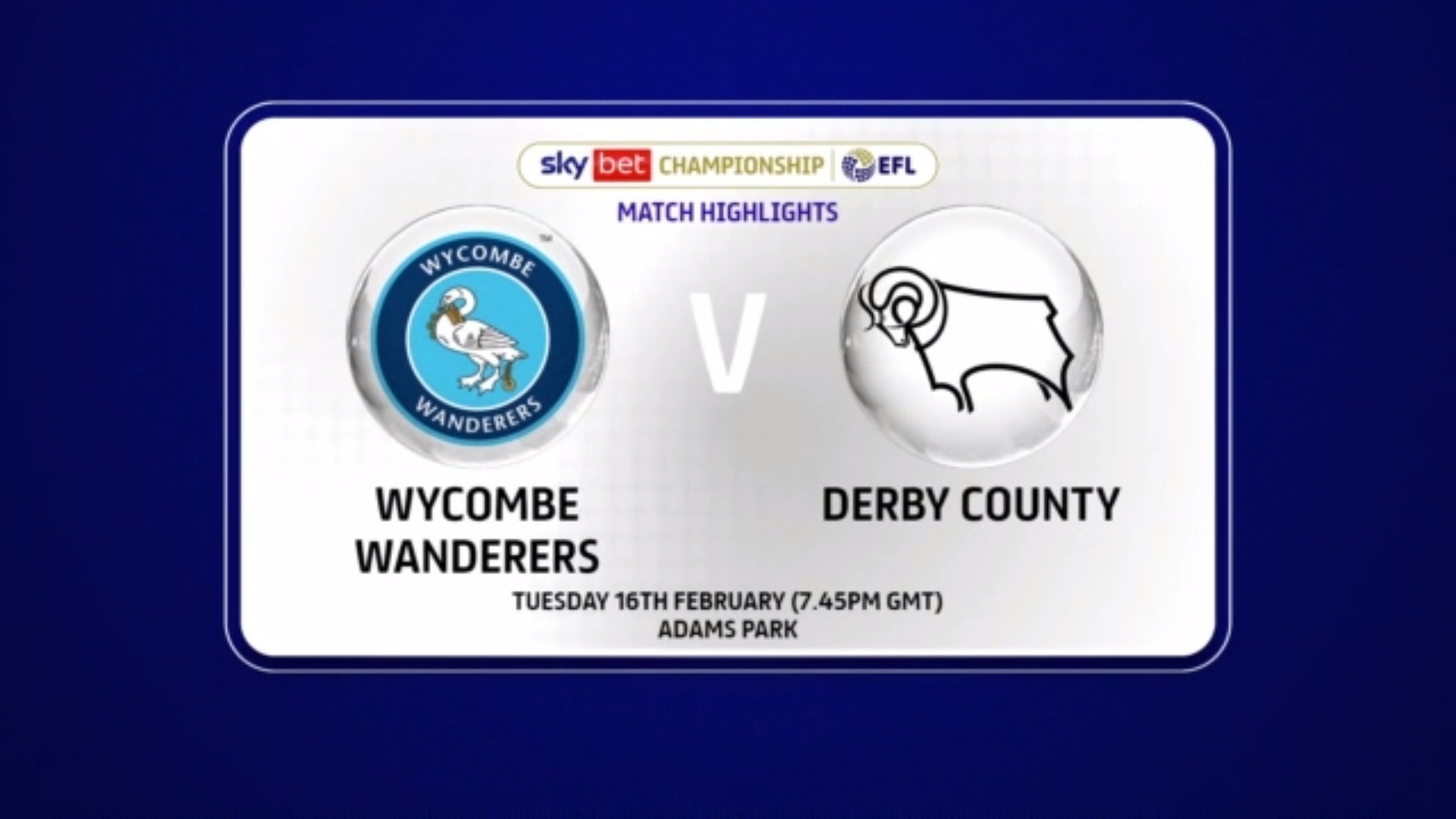 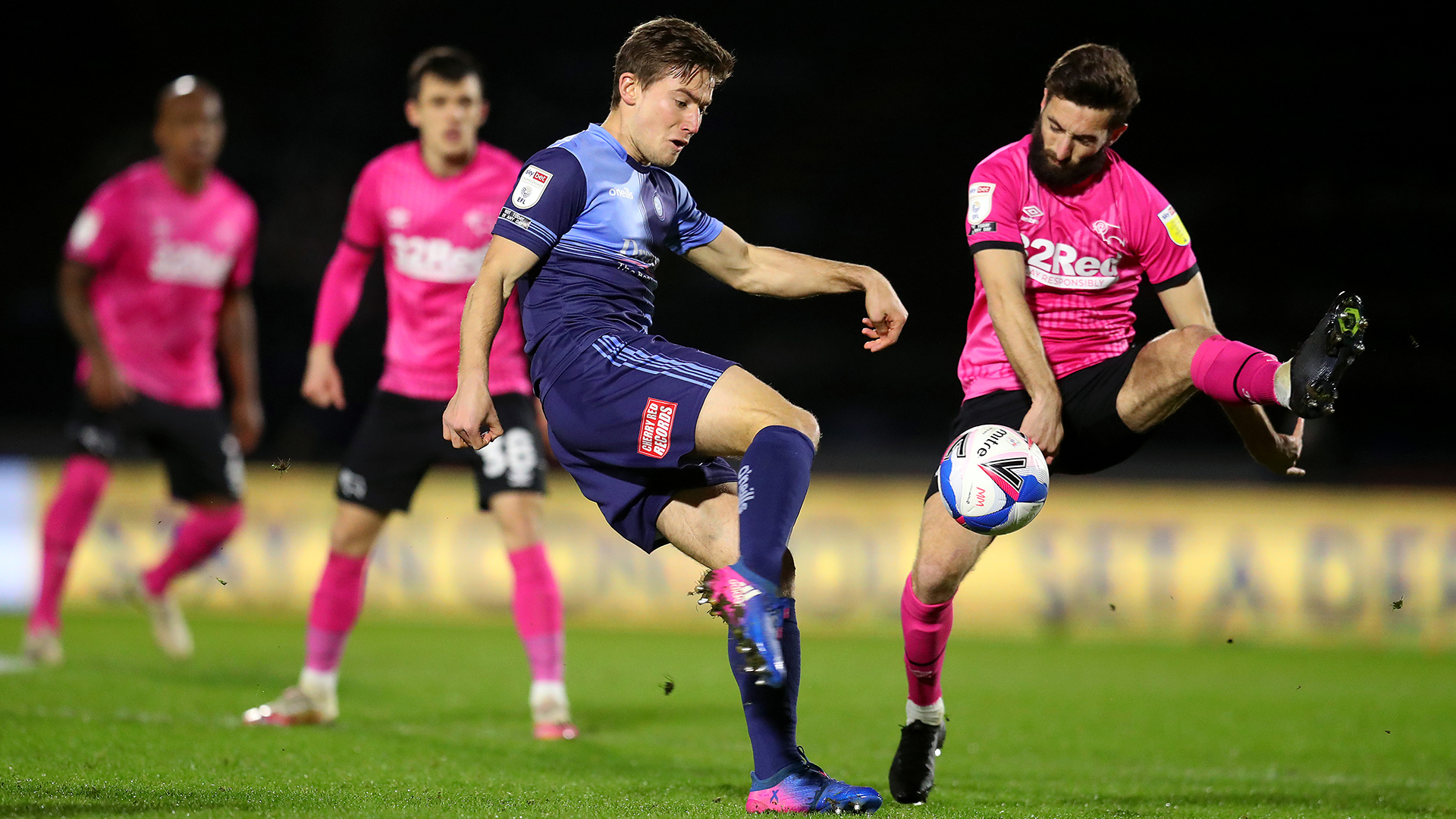